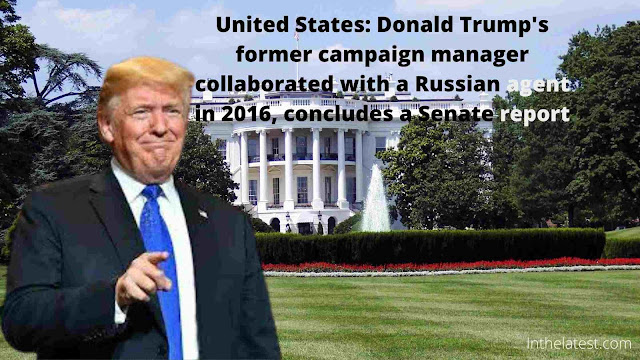 Thunderbolt in American politics, less than three months away from the presidential election. Donald Trump’s former 2016 campaign manager shared confidential information with a member of the Russian secret service, posing a “serious” threat to the United States, according to a U.S. Senate report released Tuesday, August 18.

Paul Manafort, a 71-year-old Republican political consultant, communicated directly and indirectly with Konstantin Kilimnik, identified as an agent of the Russian intelligence services, and Oleg Deripaska, a reputed oligarch close to Russian President Vladimir Putin, before and during his six months on the Republican candidate’s campaign team, the Senate Intelligence Committee concluded after three years of investigation into Moscow’s interference in the presidential campaign.
“A serious threat of counter-espionage”

This sharing of information, including internal election polls and details of Donald Trump’s campaign strategy, came at a time when Russian military intelligence (GRU) and hacker groups linked to the Kremlin had launched a disinformation campaign on social networks to help the billionaire win, the report said.

“Taken as a whole, Mr Manafort’s high level of access and his willingness to share information with individuals considered close to the Russian intelligence services, especially Mr Kilimnik and Oleg Deripaska’s associates, represented a serious counter-espionage threat,” the committee, composed of Republican and Democrat MPs, said.

The report also describes how Donald Trump’s team repeatedly sought help from Moscow and WikiLeaks to smear the campaign of its Democratic rival, Hillary Clinton. Donald Trump vehemently denied any cooperation with Russia and denounced a “witch hunt”.

Paul Manafort, who stepped down in August 2016, is currently serving a seven-and-a-half year prison sentence for various frauds uncovered as part of Prosecutor Mueller’s investigation into foreign interference during the 2016 campaign. He was placed under house arrest in May because of the coronavirus outbreak.