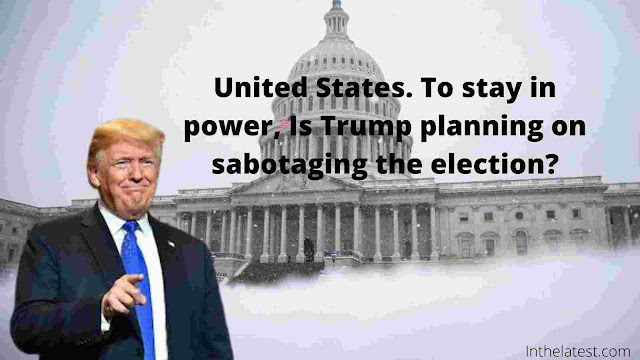 United States. To stay in power, Is Trump planning on sabotaging the election?

Trump and the Republicans plan to sabotage the presidential election and cause chaos. They hope to keep Trump in power and retain a Republican majority in the Senate.

They are developing two lines of action to achieve their goal. One of them is to undermine the postal service [the USPS, see among others on this site the article dated August 4, 2020], to make it difficult or even impossible to count the postal votes. Announcing the winning candidate would take several days or weeks. Trump has already stated that in the face of such delays, and in case he lost the election, he would not recognize the result. Legal challenges to the results by Republicans and Democrats could ensue. On Sunday, August 9, 2020, a front-page article in the New York Times (NYT) headlined: “Long legal battle may follow Election Day vote – Trump lays groundwork for discrediting result – Biden prepares”.

The article refers to the disputed result of the 2000 presidential elections in Florida. The Supreme Court had intervened. Confronted with a controversial result, its intervention had concluded that George W. Bush had elected Al Gore as president of the United States. After Gore won the popular vote, the Court gave Bush enough votes in the Electoral College [which is the body of electors that appoints the president and vice president] to give him one more vote.

In the face of such a mess, the violations of the democratic vote in the U.S. system are obvious. The NYT writes: “The extraordinary storm of the recount in Florida polarized the country in 2000 and resulted in the Supreme Court deciding who would be president. This event may soon appear to have been nothing more than a school council election in light of what threatens to happen in November.”

“Imagine  a dozen or so like Florida. Not just a series of lawsuits, but a vast array of them. And instead of two quiet candidates sitting on the sidelines and leaving the fight to surrogates, an incumbent U.S. president triggers ALL possible tweets from the Oval Office while looking for ways to use the power of his office to intervene. The possibility of an ugly November – and maybe even December and January – has become more apparent in recent days, with President Trump complaining that the election will be rigged and the Democrats accusing him of trying to turn it into a self-fulfilling prophecy.”

Trump’s reasoning about “the most rigged election in history” is based on the baseless accusation that absentee ballots are falsified in states with Democratic governors. Whereas, according to him, they would be honestly counted in states, such as Florida, whose governors are Republicans. It is true that the counting of mail-in ballots is slower than the counting of ballots cast at the polling stations. Analysts estimate that many citizens will use absentee voting in these elections to avoid the risk of being exposed to the virus.

The counting of votes will therefore not be able to be completed on election night on 3 November. Trump’s insistence that the winner must be known on the evening of the election is a staging that prepares the ground for the rejection of the result in the event of defeat. Already before the Covid-19 crisis, the Post Office was undergoing a deep financial crisis due to the costly laws of the Democrats and Republicans which forced it to place the equivalent of the pension payments for 75 years in a blocked account. No other government agency has such an obligation.

The pandemic has added to the pressure on the Post Office. Many people have ordered goods – including medicines – obtained by mail online. Previously, they went in person to their suppliers. During recent negotiations between Democrats and Republicans on new spending for the economy, Republicans vetoed a Democratic proposal for $25 billion to allow the Post to meet some of the additional costs caused by the virus.

In May of this year, Trump appointed Louis DeJoy as Postmaster General. DeJoy was a major contributor to Trump’s election campaign ($1.2 million) and, prior to his appointment, was in charge of fundraising for the Republican National Convention. He and his wife hold $75 million in shares in private competitors or subcontractors of the Post Office. Since taking office, Louis DeJoy has already put in place cost-cutting measures that have had a negative impact on the Post Office.