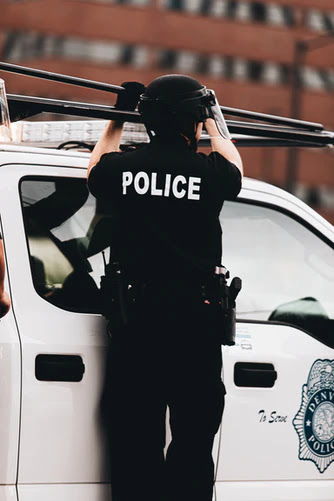 A 13-year-old child with autism is in hospital in Utah after being seriously injured by police, called for help by his mother. This tragedy illustrates once again the problem of police abuse in the United States, and the poor management of mental disorders.

A white child with autism lying in a hospital bed with gunshot wounds to the shoulder, intestines, bladder and ankles is the new face of police violence in the United States.

Called by his mother to protect 13-year-old Linden from himself, police shot the teenager several times. An almost familiar scene in a country where about a thousand people die every year after coming across law enforcement.

This new drama begins with a call for help in Salt Lake City, Utah: On Friday, September 4, Golda Barton called 911 to have her 13-year-old son, who was autistic and then in mental distress, admitted to hospital.

He later explained to a local radio station that she had returned to work that day, after a year’s break, and that her son, who could barely cope with her absence, had had difficulty coping with the situation. When the police arrived,” I told them, “he’s unarmed, he just gets angry and starts shouting, he’s a child, he needs attention,” she added.

But when the teenager ran away when he saw the officers, a police officer shot him several times. “He’s a little kid, why didn’t you just tackle him to the ground? “begged his mother, in tears. The video shot by the police pedestrian camera, a must in Salt Lake City as in other American cities, will be released in the coming days.

In a country immersed in a historic movement against police violence against minorities, the Salt Lake City drama sheds new light on this national evil – abuse by law enforcement officials.

Every year, around 1,000 people die as a result of police intervention. A reality that affects all categories of the population, even though black and Hispanic minorities are over-represented among the deceased.

This year is no exception: since January 1, 2020, according to the Washington Post, which maintains a database on the issue, 694 people have been killed by the police, including about 100 cases involving a mental health problem.

Despite the repetition of cases, despite the mobilization following the death of George Floyd on May 25, no reform has been adopted by Congress to date to try to eradicate this violence and fight against racism within the American police force.

The police, a good answer for multiple problems?

When Americans are faced with an emergency of any kind, they call 911. “Their calls are answered by call centers that have sometimes been privatized in recent years. They then turn to the appropriate services: police, firefighters, medical services,” explains Didier Combeau, political scientist and expert on police violence.
In reality, calls are most often transferred to the police. This is denounced by the “Defund The Police” movement, which was very present in the demonstrations that accompanied the death of George Floyd.

This movement, which questions the budgets allocated to the police, denounces the tendency, since the 1990s, when crime and delinquency were at very high levels, to rely on the police for all types of problems – including dealing with people with mental health problems.

Cases such as Linden Cameron’s indicate how poorly trained police officers are for this type of situation. “The police were called in to help, but instead more harm was done,” said Neurodiverse Utah, a local organization working to increase awareness and acceptance of autism.
Is it up to the police to intervene? “You don’t need to be concerned about mental problems to imagine why a swarm of (screaming) armed police officers is likely to exacerbate the symptoms of disorders – panic, anxiety…”, says the association’s Facebook page.