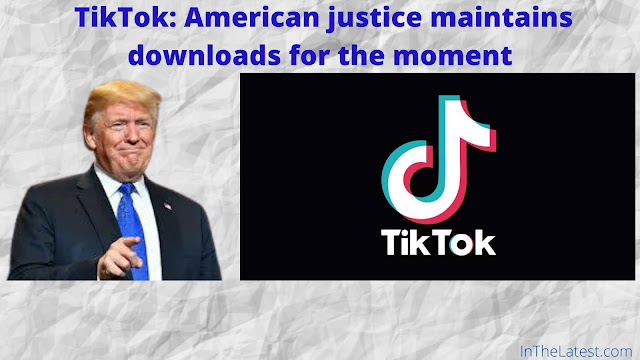 A U.S. judge decided on Sunday, September 27 to maintain access to TikTok on mobile application download platforms in the United States (Apple Store and Play Store). The social network thus remains downloadable and installable for Americans, despite previous announcements that TikTok was to be made inaccessible to US citizens on September 28. This decision effectively suspends the order given by the Trump administration, which sees the social network belonging to the Chinese group ByteDance as a threat to national security.

A few hours before the latest decision of the Ministry of Commerce came into effect, Magistrate Carl Nicholas ruled in favour of TikTok, who had filed an appeal on September 18. However, for the time being, he has refused to suspend the total ban on TikTok in the United States, scheduled for November 12.

The reasons for his decision are under seal to protect potentially confidential information, but are to be published on Monday once both parties have agreed. “We are pleased that the court agreed with our legal arguments and prevented the ban from being implemented,” TikTok said.

During a telephone hearing on Sunday morning, his lawyers said that blocking downloads of the app would be unconstitutional and would violate the right to freedom of expression, especially in the run-up to the November 3 presidential election.

“TikTok is much more than an application, it’s a modern version of the public forum, it’s a community, it’s a means of communication (…) all the more important in times of pandemic,” lawyer John Hall said Sunday. “If the ban goes into effect, it’s as if the government is preventing two-thirds of the country from coming to the agora.

The platform also said it would do irreparable damage to its growth, as it was gaining some 424,000 new U.S. users a day in early summer. And interrupting updates would, ironically, have the direct consequence of “eroding security” for the current 100 million U.S. users, Hall added.

The judge gave a reprieve to the music and comedy video app, frequented every month by 100 million Americans, as was the case a week ago for WeChat, another technological flagship founded in China. And it is not out of the question that an agreement may be reached between the Trump administration and TikTok’s Chinese parent company, ByteDance.

TikTok this week sought an emergency appeal in the federal court in Washington, D.C., saying that its ban would not be consistent with the country’s constitution.

In early August, Donald Trump signed an executive order forcing the Chinese group ByteDance to sell the platform to a U.S. company, in the name of threatening “national security” – he has long accused TikTok of spying on its users for the benefit of Beijing, without proof.

No evidence of espionage

A final sales project, announced last weekend, involves the creation of a new company, TikTok Global, involving Oracle as a technology partner in the United States and Walmart as a business partner. There would also be an acquisition of 12.5% from Oracle and 7.5% from Walmart. Americans would hold 4 of the 5 seats on the board of directors. But the finalization of this project depends on the goodwill of the U.S. President and the Chinese government.

TikTok has indeed become the new symbol of the battle between the United States and China for domination of the high-tech sector. Donald Trump has been accusing the application of spying for Beijing for months by collecting data from its users – without proof.

On Monday, September 21, the White House host, who was campaigning for re-election, hammered home the fact that he would not give his approval if the new group remained under Chinese control, while asserting that Oracle and Walmart would own the majority of the new group.

ByteDance, which includes U.S. investors, called the information “a false rumor. If the negotiations do not succeed, a complete ban on TikTok’s activities on American soil could come into effect as of November 12, warned the Treasury. But ByteDance said it had made a “request for authorization” for the export of technology, without specifying what it was about.

This initiative could concern the famous algorithm that has made TikTok a success: it allows users to display the content most likely to interest them, according to their tastes, and to lead them to spend as much time as possible watching videos on the platform.

China refuses to let this precious IT system fall into the American trap.