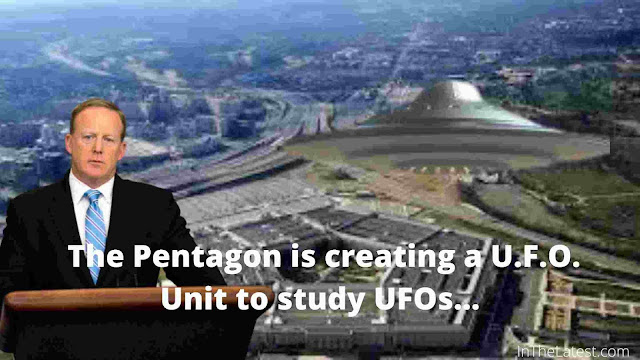 The Pentagon is creating a U.F.O. Unit to study UFOs…

The Pentagon announced on Friday the establishment of a unit officially charged with studying unidentified flying objects (UFOs), which has been entrusted to the US Navy. With the creation of the “Unidentified Flying Object Task Force,” approved August 4, the department intends to “better understand and better understand the nature and origin” of these phenomena, a U.S. Defense Department spokeswoman Susan Gough said in a statement.

For the U.S. military, the “unidentified air phenomena” have nothing to do with potential little green men, but rather with very real opponents of the United States. Washington is particularly worried about China’s espionage capabilities, using drones and other airborne means.
Informal working group

The mission of the new Pentagon unit is to “detect, analyze and catalog these unidentified airborne phenomena that could pose a threat to U.S. national security,” the spokeswoman said. The Pentagon “takes very seriously any incursion of unauthorized aircraft into our training facilities or our airspace, and examines every report” about it, she added.

The U.S. Senate took an interest in the Pentagon’s activities in this area in June, officially confirming the existence of an informal working group on the subject, which was unveiled in 2017 by the New York Times. The new unit will formalise the operations of these soldiers and will enable Congress to follow their activities more closely.

At the end of April, the Pentagon released three videos taken by US Navy pilots showing in-flight encounters with what appear to be UFOs. One of these videos – all in black and white – dates from November 2004 and the other two from January 2015. One shows a rapidly moving, oblong-shaped object that, seconds after being spotted by one of the sensors on board the U.S. Navy aircraft, disappears on the left side after a sudden acceleration. In another video, an object is seen above the clouds, with the pilot wondering if it is a UAV.