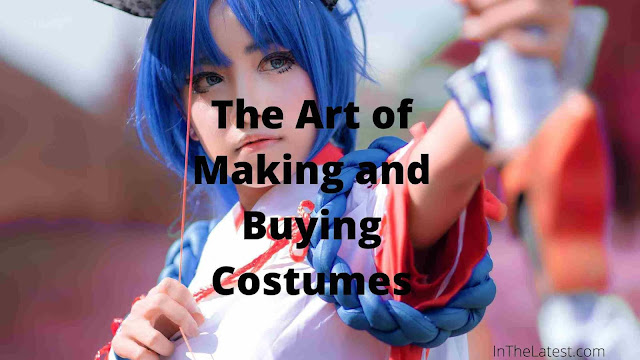 Contents hide
1 The Art of Making and Buying Costumes!
1.1 Is making a costume by yourself hard and can you do it?
1.2 How to rent or to buy a certain costume?

The Art of Making and Buying Costumes!

People always liked to dress up in different clothes and to try on new things. Every now and then a certain masked party would come up, and we would all be happy because we will get a chance to dress as someone who is not us. This is a big opportunity not only to try new costumes but also to act as those characters and thus express our acting skills. Face it – rarely who gets a chance to dress silly and act on a daily basis (except actors, of course). It is basically relieving to be someone else for a while and forget about yourself for a night or two. Good costume parties are the ones where there is a certain theme and we all dress as superheroes, for example, but even better ones are those where there is no theme at all and we have a free choice of costumes. This involves a lot of creativity and preparation. However exhausting this preparation might be, we all somehow enjoy it and sometimes the best part of a costume party is the preparation of a costume itself.

Is making a costume by yourself hard and can you do it?

There are several ways to obtain a costume for a party. You can make them yourself, rent them, buy them, or have someone else make them for you. The cheapest way of obtaining a costume is certainly some DIY project. When you have all the materials you need, you only need to put them all together and voila. But is it that simple really? Well, it depends on the kind of costume you are making. If you decided to be a robot, you should definitely not have much trouble. All you have to do is obtain several cardboard boxes from the old TV set that you had bought and paint them a bit. If you, however, decide to make a costume that resembles those mascots from basketball games, then you would definitely need much more materials and much more spare time. Besides that, these kinds of costumes require certain skills such as sewing, needlework, etc., and it is probably better to hire someone who has experience with these skills in order to help you out. This way, you will be able to make just the costume you want and you will not spend a lot of money on it. However, yet another skill that you may require when it comes to making costumes is that you will certainly need to have imagination, for this is the most important part of every costume designing. There are certain places on the internet that provide you with detailed instructions on how to make every possible part of a costume – from toes to ears.

How to rent or to buy a certain costume?

If you should decide to rent a costume for your costume party, it is always good to go to your local theatre. If you are lucky enough, they will have plenty of costumes to choose from and you will have to pay very little for them. Of course, those kinds of costumes is usually a little bit dusty since no one really takes care of them except when they are used for the play, which is rarely. There are, of course, shops that will rent you a costume for a certain amount of money.
However, sometimes renting costumes does not pay off much. It is much more preferable to buy one than to rent one. Buying a costume is just a bit more expensive than renting it but you get to own it and you do not need to return it after the costume party or whatever event you are attending. There are numerous shops that provide such a service, and some costumes can even be ordered online.
To sum up, it takes a lot of creativity and imagination to create your own costume but if you do not possess certain skill or materials in order to make one yourself, you should definitely consider whether you should rent or buy a costume. After you put your costume on, the part may begin!