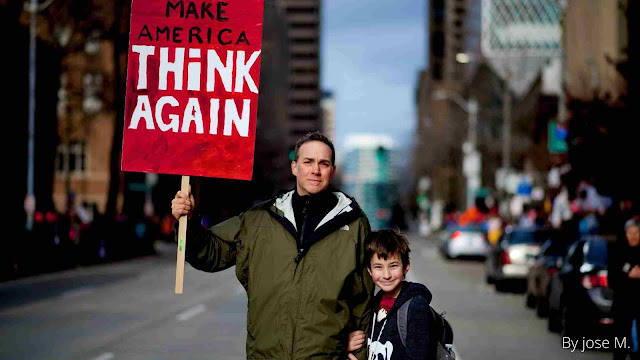 It is edifying, as evidenced by this convention to its glory.

The watchword: we frighten the world.

Democrats are no longer just left-wing, they have become left-wing extremists, Marxists, Stalinists.

Biden’s America will be apocalyptic. What would they have said of the America of a Bernie Sanders?

With Biden it will be poverty, socialism, organized crime, drugs, street gangs, in a word: chaos!

But all is well in the America of the Tanned Joker.

There are more than 175,000 deaths of COVID-19, the president is not moved. The police shoot African-Americans, the Joker does not formalize. A hurricane threatens Louisiana? No problem, it will go to throw paper towels to help them.

Donald Jr. and his charming girlfriend made some wild claims about the Joker. Both of them were so excited that they created a hashtag #cocaineconvention2020. One could have sworn that these two had made one or two rails of gunpowder.

We saw everything: a pro-life Christian fundamentalist, the armed couple from Saint-Louis… Pam Bondi, former attorney general of Florida, accusing Biden of nepotism! (That’s not something you can make up!)

Kellyanne Conway came to praise her mentor one last time. Mike Pence, the soporific Mike Pence, is a bulwark against the radical left.

He is right to be so because by 2040 the American population will have completely changed.

The reign of the WASP (the white Anglo-Saxon Protestant) is coming to an end.

And instead of appeasing the people, the inflammatory speeches of these participants stir their anger.

Perhaps this is what leads to events like the one in Kenosha, where a 17-year-old boy armed with an assault rifle set out to protect the streets of his town. He reportedly shot and killed two protesters who were protesting the police violence that has been taking place in Wisconsin in recent days.

The kid was walking down the street displaying his gun, without being worried. He wasn’t shot in the back…

The convention closed with another speech by The Joker live from the White House gardens. A place that should not be used for partisan events.

But since no one lifted a finger…

In introducing her father, Ivanka said that Washington has not changed her daddy, but rather himself has changed Washington.

One thing is certain… 1600 Pennsylvania Avenue in Washington has seen better days.