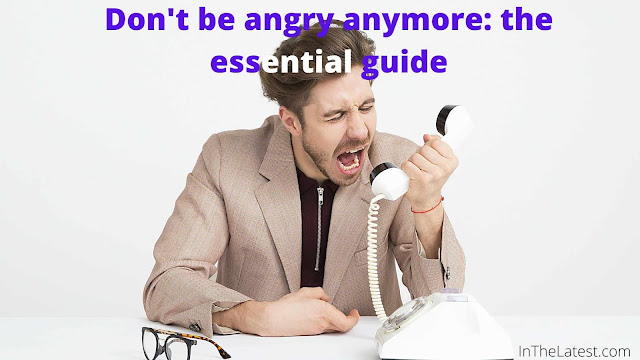 A majority of people think that anger is a natural emotion to feel. After all, it is normal to get angry once in a while. You have every right to be angry when things don’t go your way.

But I disagree. While there’s nothing wrong with getting angry (after all, there are no good or bad emotions), anger doesn’t have to be an option. Just as you choose to be angry, you can also choose not to be angry. You can solve your problems in the same way, or even better, without making your anger talk.

In today’s article, we will look at conscious methods of anticipating your anger so that you can gradually let go of this feeling which can be very destructive.

So I will not talk about “anger management” or “anger control”, which are only short-term solutions. This guide aims at finding lasting solutions to anger problems, which should be a major goal in our lives.

Step 1: Recognize when you are angry

Contrary to what many people think, anger is not only limited to those moments when you lose your temper and burst into rage.

Anger begins when you accumulate negative emotions about something or someone. The more unhappy or sad you feel, the more the anger muddies up inside you… until the vase overflows and you can’t hold that emotion in any longer.
There are several stages of anger
This means that if you often feel irritated or frustrated, it is as if you have a rabid beast inside you, just waiting to be released.

You are that time bomb, ready to explode at any moment. All you lack is (a) the wrong stimulus or (b) enough accumulated frustration to burst out in anger about someone or something.

Serenity. This is a stage where anger does not exist. You feel a sense of peace and calm.

Irritation. This is the first level of anger. Here you may feel a slight sense of annoyance, but it is still repressible. (If you are very angry, you can skip this level and go directly to levels 3, 4 or 5).

Frustration. This is the intermediate point between mild annoyance and real anger (Level 3). You are frustrated and it shows. It’s harder to deny your frustration compared to Level 1.

Anger. Your frustration has built up to the point where you are currently feeling angry. Not only that, but your frustration is such that it is now manifesting itself physiologically. You can feel your heart beating faster and your whole body warming up.

Angry. A deep state of anger. You’re pretty angry at this point. While you feel angry, you haven’t lost control… yet. You are still lucid and able to control your actions but for a long time. One more stimulus and you’re ready to break down.

Rage. That’s it, you’ve lost control! You see red and nothing can stop you from violently attacking others. This is the state where you say and do things you wouldn’t normally do, in a fit of anger.

Where do you usually stand? How often do you enter each level? What is the highest level you have reached?

Regardless of your answer to each question, you should strive to reach Level 0, because that is our natural state of being. No one is born with an angry mind.

The only reason we feel irritation, frustration, anger or rage in our inner self is either (a) because of the past, repressed events that are stuck in our throat, or (b) a wrong way of thinking.

Now for the rest of the day, observe your reaction to everything that happens around you. When you feel irritated or angry, write down the trigger and add it to your list. Try to identify as many angry triggers as you can.

This will help you become aware of triggers that you may not have been aware of until now, and that can happen again every day. Things that don’t necessarily make you angry, but that are sure to irritate or frustrate you.

Beyond that, you will also discover deeper triggers that you are very ticklish about. Certain people or situations that can make you instantly angry because they are contrary to your values. For example, not to put up with hypocritical/fake people in a discussion, or people arriving late all the time.

Step 3: Dig into your anger triggers

Once you have completed your list of anger triggers, dig down into each of these triggers to discover their hidden causes.

Use this exercise to find out why a situation makes you angry. For each trigger, ask yourself, “Why does this make me angry?”.

Write the answer on a piece of paper and repeat the question until you reach the famous moment of realization (when you have found the cause of your anger). This discovered cause is the source of your anger.

For example, let’s imagine that after doing step #2, you realize that your anger triggers are : (a) talking to rude people and (b) seeing older people being abused. Let’s dig them out separately.

Here you notice that what makes you angry at rude people is related to your childhood, when you were treated roughly by your classmates. In this case, this is the underlying trigger for your anger.

Here you have discovered that your anger towards people who abuse older adults is related to times when you didn’t get any help, even if you needed it.

This is the real reason you get angry when you see older adults being abused (more than any other reason you’ve mentioned before).
Anger Triggers and Past Events

As you explore each of the anger triggers, you can go back to a past event, as we have done in the two examples above.

Which brings us to the next step, which is…

Step 4: Free yourself from anger

Having now discovered the origin of your anger trigger, it’s time to get rid of it.
The first step is to identify the injustices or grievances you are still feeling as you look back on this past event.

For example, imagine that one of your friends broke a promise he made to you last year, and you are still feeling bitter about it today. Why are you still angry with him? What do you blame him for?

Or maybe what made you angry is that you thought you shared a special connection. And that you wished he had placed more value on your friendship, remembering and honoring his promise.

From there, work through your rebuke, one at a time.

If you’re angry with your friend because he didn’t keep his promise, ask yourself: Why do you have such high expectations of him? Why do you place so much importance on fulfilling that promise? Is he a good friend or a bad friend just because he didn’t live up to what you expected of him? Are you being honest and fair with him, evaluating him on that basis?

If you are angry with your friend because you think he doesn’t care enough about you to fulfill his promise, ask yourself: Is it really true that he has never considered you a friend? Or is that just your conclusion? How do you think he sees this friendship?

Confront your assumptions and beliefs as you dig deeper into your blame. The majority of these reproaches are the result of an error in your thinking, or that you don’t have an overview of the situation. When you discover the faulty element in your thinking that led you to think this, then you quickly release your anger.

Step 5: Stop generating new anger (by freeing yourself from your attachments)

As you deal with the “old” tantrums of your past, also promise not to create new tantrums in your mind.

This means that if you encounter situations or people that violate/shock your values, don’t get angry. Accept that things may not be the way you want them to be, at least at that point. Accept that there are differences between reality and what you want. Then focus on finding, or even creating, solutions.

We may believe that we have a right to feel anger, but then it’s more about reacting than thinking. There is another possible path beyond being angry or ignoring our anger: not being angry at all.

When you are angry, you are like a madman wearing a straitjacket who threw gasoline on himself and then set himself on fire. You get agitated trying to hurt others with the flames on your straitjacket – and you probably end up hurting one or two people in the process – but the only person you end up hurting is yourself.

To permanently remove anger from your life, you need to make a decision to stop being angry, while you gradually work through your past anger. This means letting go of past attachments. It means not expecting people to conform to your expectations. It means learning to accept that life is not a long, quiet river, and that this is part of its peculiarities.

Have you also decided to give up your anger? Tell us all about it in the comments!