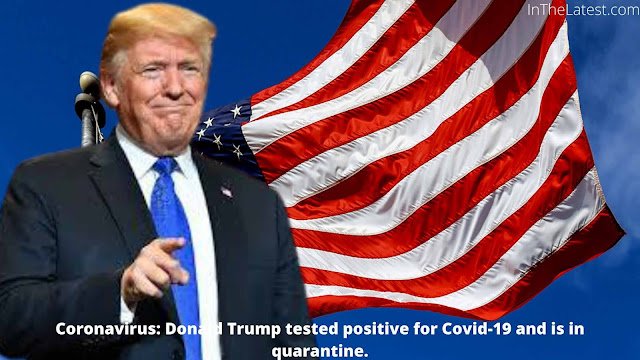 Coronavirus: Donald Trump tested positive for Covid-19 and is in quarantine.

Donald Trump confirmed it on Twitter: the American president and his wife tested positive at Covid-19 on Thursday evening. Two hours earlier, Donald Trump had announced that they were placing themselves in quarantine after the positive test of his collaborator Hope Hicks. This was enough to turn the American presidential campaign upside down, almost a month to the day before the November 3 elections. 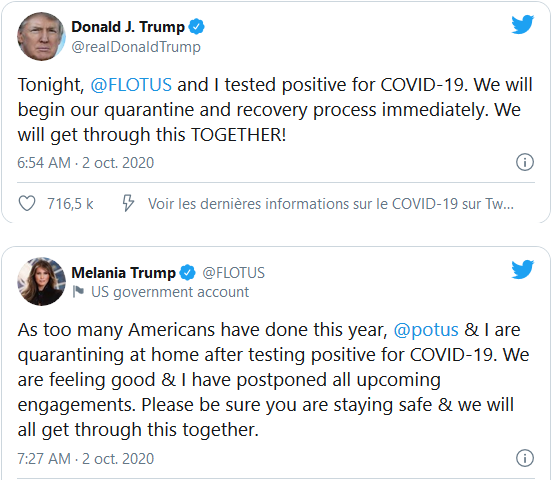 “Tonight, the First Lady and I tested positive at Covid-19. We will immediately begin our quarantine and recovery process TOGETHER,” wrote Donald Trump. Melania Trump said they were “feeling good.
White House convalescence, Florida meeting canceled

“Both the President and the First Lady are doing well at this time, and they plan to remain in the White House during their convalescence. I expect the president will be able to continue to perform his duties without interruption during his recovery,” wrote Donald Trump’s physician, Sean Conley. According to the presidential schedule, his trip to Florida, where he was scheduled to hold an election rally on Friday, has been cancelled. 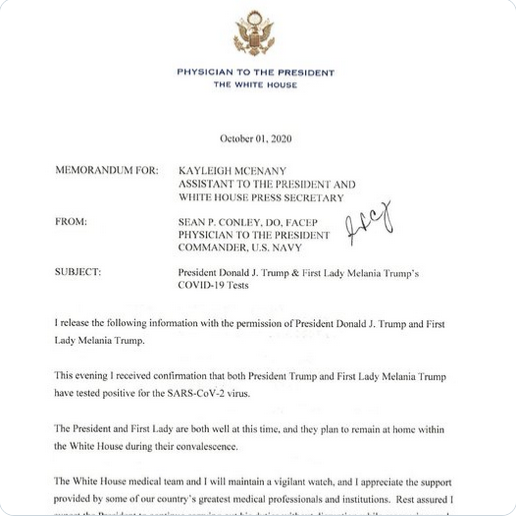 According to the 25th Amendment, a president who is unable to perform his duties, particularly in the event of illness, may temporarily transfer his authority to the vice president. As for the election, it is much more complicated because voting has already started, with the names Trump-Pence and Biden-Harris on the ballots.
As law professor Rick Hasen notes on the Election Law blog, only Congress has the power to postpone an election. What if the worst happens to one of the candidates? The question is morbid and complex. Technically, the U.S. system does not operate by direct universal suffrage. Americans vote for Electoral College electors, who could, in theory, give their vote to someone else (including a last-minute white knight). But the legal situation is different in each state and, the expert concludes, “in the event of a tragedy, there would be enormous uncertainty” about what would happen next.