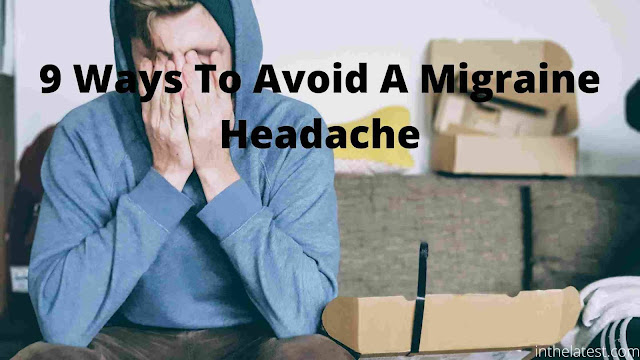 9 Ways To Avoid A Migraine Headache

Preventing migraine headaches can be a complicated issue for many sufferers because there isn’t just one cause that triggers attacks. There are probably thousands of triggers and trying to avoid them all is nigh on impossible. However there are many things that can be implemented to help relieve or avoid migraines or headaches.

Caffeine is a product that can cause a migraine headache of immense proportions. The problem with caffeine is two-fold, firstly too much will provoke an attack, but if you are used to taking too much, reducing your intake too quickly may result in withdrawal symptoms which in turn can also lead to a migraine headache. To avoid this problem, try to cut back slowly over a period of time.

Aspartame is an artificial sweetener which often goes by the brand names of Nutra sweet and Equal and is found in numerous food products including diet soft drinks. Aspartame’s function in triggering migraines may be due to its effect on serotonin levels.

There are countless reasons for giving up smoking and a avoiding a migraine is certainly one of them. Obviously if you are a habitual smoker then this can be an issue, however even second hand smoke can be as likely to trigger a migraine as actual smoking. If you find yourself in a smoking environment then it’s advisable to move away so as not to trigger an attack.

Create a habit that requires a regular pattern of sleeping and waking, in other words go to bed and get up at the same time every day irrespective whether its weekdays or weekends. For many people who discovered this may have been one of their migraine triggers have found a reduction in migraine and headaches.

Many women who suffer from migraines have discovered that birth control pills and their effects on hormones can often be the cause of their migraine pain. It doesn’t mean stop taking the pill, because some people have found that by just changing to different a manufacturer or brand the migraine will often disappear. If the problem persists because of taking the pill, then perhaps it may be wise to consider other forms of contraception.

Bright lights can often be the trigger for very severe migraines. If bright lights are one of your migraine triggers, one of the first things to do is to consider changing to more soft lighting whether it’s at home or work. Try using lamps instead of overhead lights and certainly avoid the use of fluorescent lighting where possible. Computer screens emit bright light and if you spend a lot of time in front of a monitor, be sure to take frequent breaks.

Many foods can contribute towards a migraine attack, so being aware of what do eat and what not to eat is very important. There are a number of foods that contain natural chemicals and food additives such as tyramine, and it’s these chemicals that can trigger a migraine. You would be well advised to steer clear of foods such as aged cheeses, processed meats, citrus fruit, chocolate and alcohol.

Strong smells and odours don’t readily come to mind as migraine triggers, but alas they can be a major cause. Exposure and sensitivity to odours and smells can range from perfume to car exhaust fumes, although it’s probably the more pungent smells that will be the migraine trigger.

Having regular exercise is not only good for your overall health, it can also help to reduce the possibility of a migraine headache by helping the blood flow. However a word of caution here, if you are not used to exercise, do not overdo it, start with a short walk and build up from there, otherwise it will do you more harm than good.